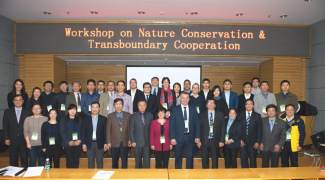 NEASPEC and Beijing Forestry University jointly held the 2016 Workshop on Nature Conservation and Transboundary Cooperation to review outcomes of two NEASPEC nature conservation projects on migratory birds and Amur tiger and leopards, as well as to discuss subregional needs and follow-up actions for NEASPEC. Over forty participants from all six NEASPEC member States, including government officials, experts, international organizations, NGOs attended the Workshop.

One of the major outcomes from the NEASPEC project was on transboundary corridors and the identification of numbers of tigers and leopards crossing the border of China and Russia. Together with other findings on their limited habitats and low genetic diversity, the numbers indicate the significance of intergovernmental cooperation on improving their conditions for cross-border movement and habitat protection.
As for migratory birds, this has been the first occasion of such scale where 80% of potential crane habitat has been surveyed in eastern Mongolia, identifying critical sites for four species of cranes and key congregation sites in Mongolia which support over 40% of the regional White-Naped Crane population. Meanwhile, higher concentration of birds at sites in Liaoning (China) and Cheonsu Bay (Republic of Korea) has been observed, yet very low breeding success has been found in the Russian part of Dauria.

In this connection, the Workshop also discussed knowledge gaps, capacity needs, public awareness and cooperation opportunities, and identified a number of recommendations on follow-up activities. Proposals of next steps under the concept of “connectivity conservation” have been presented, which would address adverse impacts arising from mismanagement of physical and ecological interconnectedness between countries and enhance human connectivity among stakeholders.